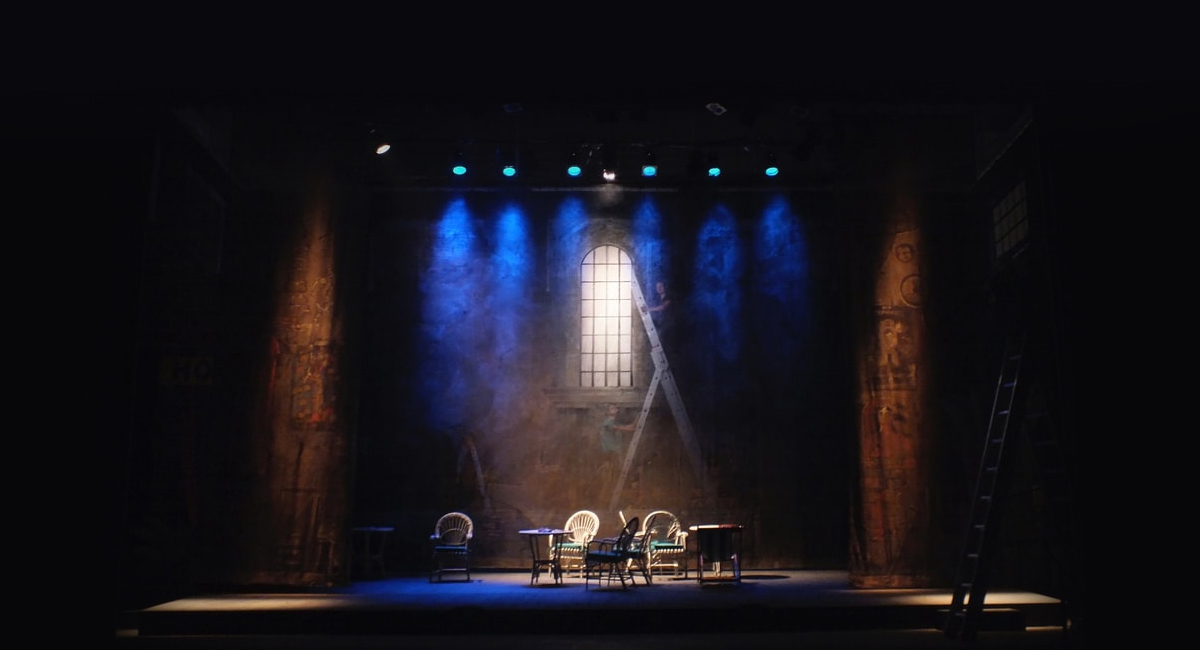 Historian of Croatian dramatic literature and critic, theatrologist, theatrographer and lexicographer Branko Hećimović was born in 1934 in Zagreb, where he graduated and received his doctorate in 1965, defending the work Croatian Dramatic Literature between the Two Wars at the Faculty of Philosophy (Rad JAZU, vol. 353, 1968). From 1956 to 1972, with a one-year break in 1958/1959 when he served in the army, he was employed by Radio Zagreb, as a theater critic and editor of the Cultural and Artistic Editorial Office, and as head of the Drama Studio and editor of the Art Program. Dismissed at the beginning of 1972, he briefly held the position of acting editor of the Drama and Literary Editorial Board, and then, from October 1972, he was the editor for general culture in Školska knjiga. In August 1977, he was admitted to the Academy’s Department of Literature and Theater Studies and elected a senior research associate, and in 1982 a research advisor. In the meantime, in 1978 he accepted the leadership of the course Theatrical Practicum at the Academy of Dramatic Arts and led it until 2007. He has been the head of the Department of Theatrology since 1979, and in December 1990 he was appointed head of the Department. After the founding of the Institute of the History of Croatian Literature, Theater and Music of the Croatian Academy of Sciences and Arts in 1993, he was the head of two departments, the Department of the History of Croatian Literature and the Department of the History of Croatian Theater. which he runs part-time until January 2018. In 1980, he was elected an associate member of the Croatian Academy of Sciences and Arts. He is a lifelong member, associate and honorary scientist of the Croatian Academy of Sciences and Arts.

He began publishing in 1954. At first, he wrote mainly theater reviews (Radio Zagreb, “Teatar”, “Vjesnik”, “Književnik”, “Kolo”, “Telegram”…) and articles, feuilletons and essays on recent theater issues. He then devoted himself more and more to the study of Croatian dramatic literature, especially in the 19th and 20th centuries, and it became, together with the theatrical art of those centuries, the main area of ​​his interest. He is the author of several books (co-author M. Flegar, Two Comediographers, 1971; Great Names of Croatian Acting, 1975; 13 Croatian Playwrights, 1976; Dramaturgical Triptych, 1979; Can Laura Be Trusted? 1982; Conversations with Pomet, Desdemona and the Polish Jew, 1995; Under Krleža’s Umbrella, 1997; In the Embrace of Theater, 2004; Edition of Form, Feuilletons, Diary and Memoirs, Controversies, Criticisms, Comments and Letters, 2010; co-authors Marija Barbieri, Henrik Neubauer, Slovene Artists on Croatian Stages / Slovenski umetniki na Croatian stage, 2010) and anthology (Pomet’s Society, Comedy of Nalješković and Držić to the Present Day, 1973; Anthology of Contemporary Croatian Drama, “Vidik”, No. 16-18, 1973; Das kroatische Drama des 20. Jahrhunderts, Die Brücke », No. 51-53, 1977; Selected Slovenian Dramas, 1982; co-author B. Pavlovski, Contemporary Macedonian Drama, 1982; Anthology of Croatian Drama, 1-3 books, 1998; co-authors N. Batušić and R. Marinković, Il teatro croato del dopoguerra, “La battana”, No. 91- 92, 1989; Antologio de kroataj unuaktaj dramoj, 1997), and co-author and editor of the monograph Dragica Krog Radoš, actress and subreta, 2006; Dragica Krog Actress and Saubrette, Expanded version, 2014. He is also the author of two editions, which contain CDs and accompanying booklets: Verses, humorous monologues and scenes, Gramophone records of members of the Croatian National Theater in Zagreb and performers of Zagreb cabaret 1906-1930 and Recitations , narrations, dramatic monologues and scenes, Phonogram records of members of the Drama of the Croatian National Theater in Zagreb 1909-1952, Zagreb 2005.

From 1978 to 1988 he was a member of the Hvar Theater Day Committee, and in the last few years of his existence he was also a member of the editorial board of the Five Centuries of Croatian Literature Library, for which he prepared selected works by fifteen writers, including Tito Brezovački and Milan Begović. He further prepared and commented for the press on unpublished or lost in periodicals and legacies dramatic and critical texts by Milan Begović, Zlata Kolarić-Kišur, Marko Fotez, Marijan Matković and Zvonimir Bajsić, and he is also the editor of Selected Works by playwrights, essayists and critics Marijan 2001. in eight books. He has also prepared several anthologies and magazines dedicated to radio drama, theatrical material and theatrical issues, such as the anthologies Praha – Warszawa – Zagreb, Nagrađene radio-drame, 1968, Contemporary Drama and Theater in Croatia, 1987 and Karlovac Theater Century, 1995. He is also the organizer of twenty-four and co-editor of two collections of press releases from scientific conferences held as part of the theater and theater event Krleža’s Days in Osijek.

Aware of the importance and significance of recording,

preservation and processing of multidisciplinary theatrical material expands the activities of the Department focused until its arrival in the Institute almost exclusively on the Croatian National Theater in Zagreb, its takeover from other Zagreb and other theater centers, and from individuals, thus increasing the museum-archive fund, grew into national, for two to three times. His obsession with theatrical material, and especially scenography and costume design, encouraged him to prepare numerous exhibitions for which he composed and signed (Scenographies by Aleksandar Augustinčić, 1997, Theatrical Portraits and Scenographies by Zlatko Kauzlarić Atač, 1997, second edition entitled From Drawings to Scenes, 1998). ), prepares and edits catalogs.

He lectured at the Slavic School in Dubrovnik and at the postgraduate study of the Faculty of Philosophy, University of Zagreb, was a mentor and member of the committee for numerous master’s and doctoral theses and participated in a number of scientific conferences, such as the Croatian Academy of Sciences and Arts, Faculty of Philosophy. Zagreb, the Society of Croatian Writers, Sterija’s Pozorje in Novi Sad, the National and University Library, the Faculty of Zadar, the Faculty of Education / Philosophy in Osijek, the Institute for Migration and Ethnic Studies in Zagreb, the Croatian-Bulgarian Society, the Hvar Theater Day, Krleža’s Days in Osijek…

He is also engaged in lexicographic work. He is one of the main contributors to the Encyclopedia of the Croatian National Theater, as well as a contributor to the Lexicon of Writers of Yugoslavia and the Encyclopedia of Croatian History and Culture. He is a collaborator and editor in the editions of the Lexicographic Institute “Miroslav Krleža” – Yugoslav Encyclopedia and Croatian Biographical Lexicon. Translations from Russian (VV Majakovski Stjenica, 1958, 1982) and Slovenian, adapts plays and dramatizes prose works for radio performances (dramatization by Šenoin Prosjak Luka and adaptation by Krležin Michelangelo Buonarroti were translated and broadcast on Radio Ljubljana), and from Tanhofer’s film recordings of Gavella’s direction by Krleža’s drama In the camp at the Zagreb Drama Theater, he adapts the tonal component to radio reproduction, publishes feuilleton-essay and memoir recordings, as well as reflections on events and individuals from the artistic milieu.

He has been a member of the Croatian Writers’ Association since 1963, when he was elected a member of Matica hrvatska and one of the founders of the Croatian Society of Theater Critics and Theatrologists, and was also elected its president. In two initial terms, he is the president of the Board of the Miroslav Krleža Fund, and then he is its long-term member. Re-elected president at the end of his 2011 term, he will hold this position until 2017. Among the few initiators of Krleža’s days in Osijek is the president of their Committee from the founding of this theatrical-theatrical event in 1990 to mid-2017.

He won the Award of the University of Zagreb / ​​for a diploma thesis in Russian literature LN Andrejev in Croatian literature / 1958; special awards of the Croatian Journalists’ Association 1961-1962 / for theater criticism of the performance of Sartre’s play Prisoners from Altona at the Croatian National Theater, Zagreb / ​​1962; Third Prize for Documentary Reporting / The Big Names of Croatian Acting, Viktor Beck / Yugoslav Radio and Television Radio Week, Ohrid 1972; Charter / Memorial Recognition of the Board of the Miroslav Krleža Fund for Presidential Commitment to the Work of the Board, 1989; Bartol Kašić Awards of the Committee for the Awarding of Republic Awards to Scientists of the Republic of Croatia for the Repertoire of Croatian Theaters 1840-1860-1980, Zagreb 1990, 1991; Marko Fotez Awards for the Repertoire of Croatian Theaters 1840-1860-1980, Zagreb 1990, 1991; the first Dimitrija Demeter Lifetime Achievement Award of the Society of Croatian Theater Critics and Theatrologists 2012